A conversation in the clouds

A conversation in the clouds

challenges now and then

One of the advantages of travelling alone is the ease with which one comes into conversation with other travellers. On the flight from Zurich to Johannesburg, I was seated next to a Swiss lady in her 70’s. She told me about her life.

She had been a nurse, and after retirement, she began looking for new inspirations in her life. She found a new challenge in South Africa, helping a Danish organization that focuses on AIDS prevention. She worked there for 2 years, and it wasn’t easy. AIDS was, and still is, a significant health problem in southern Africa, affecting about 25% of the population.

This disease still carries a stigma. AIDS patients are often ostracized. There is a superstition that they bring death into the house. There is some measure of sexual education, but there is still resistance from the church and logstanding prejudices. For example, the church provides financial support, but the helpers are forbidden to explain the proper use of condoms. One wonders how many people have lost their lives because of these policies.

After her contract expired, she left the Danish agency. Still wanting to help, she joined forces with a local woman, and opened an orphanage. This ambitious enterprise required a lot of determination, energy and money. At some points, the two women weren’t sure whether it would come to fruition. There is little support from the government, so they rely on donations and the help of the local population. Currently, the orphanage houses 28 children ranging from 1.5 to 13 years old. The goal is to provide the orphans with an adequate education that gives them a chance in life, which in turn, will hopefully prevent them from drifting into criminality. This woman is so passionate about her project that she can hardly stop talking about it. At home in Switzerland, she has gotten a a reputation for being somewhat obsessed. In some ways, she reminds me of a character in the “Mma Ramotswe” novels of Alexander McCall Smith.

admin augenblicke 2019 11. March 2014
Photography
Next The call of the hyenas 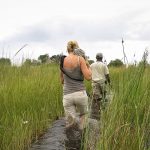